Due to its geographical situation Ovesné Kladruby is ideal for trips to the surroundings. On a ride of less than 2 hours you'll get to important cities worth seeing, to impressive historical and cultural places as well as to unique natural landscapes.

The church of St. Laurence dates back to the baroque ages. The original building was destroyed down to its foundation walls by a fire. Today's parish church was built between 1746 and 1748.

The Teplá Monastery is about 7 miles from Ovesné Kladruby. The Premonstratensian monastery was founded as early as 1193 and has a precious library of about 100,000 volumes. The 14th century Codex Teplensis is the oldest complete translation of the New Testament into middle high German, written before Martin Luther's translation.

Founded in 1818 Mariánské Lázně got famous as a spa through a number of mineral springs. About 100 ferruginous carbonic springs rise here. A lot of them have been known since the 16th century. Architectonically many of the houses in Mariánské Lázně are built in the neo-classical style. The most famous of the buildings, the Colonade dates back to 1889 and carries the name of the Russian writer Maxim Gorki. In front of the Colonade there is the so-called Singing Fountain, which fascinates visitors with impressive musical and light effects.

For further information turn to the info-centre in the upper part of the mainstreet 'Hlavni' – House Chopin in 35301 Mariánské Lázně, Hlavní 47 - Chopin House, 353 01 Maríanské Lázně 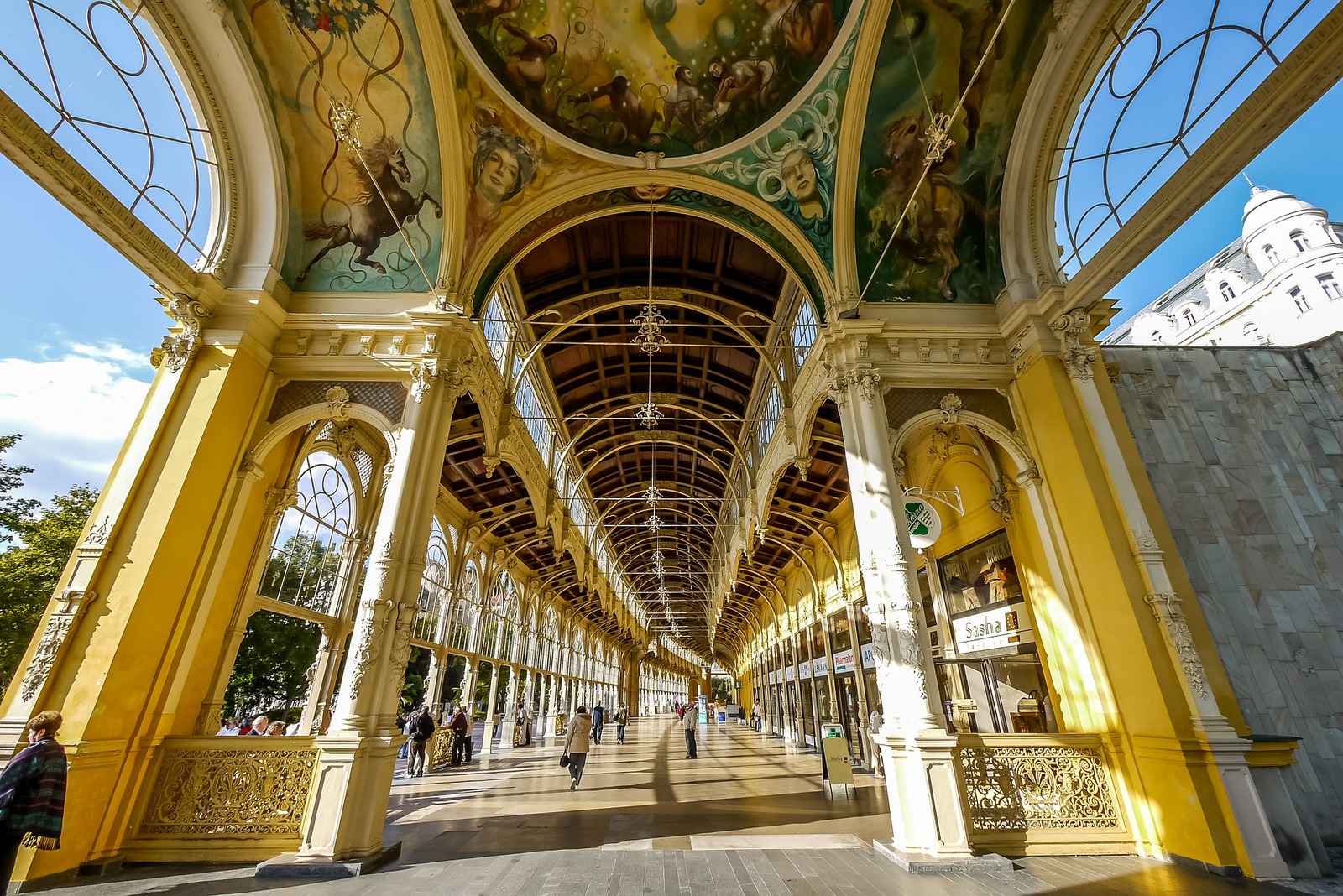 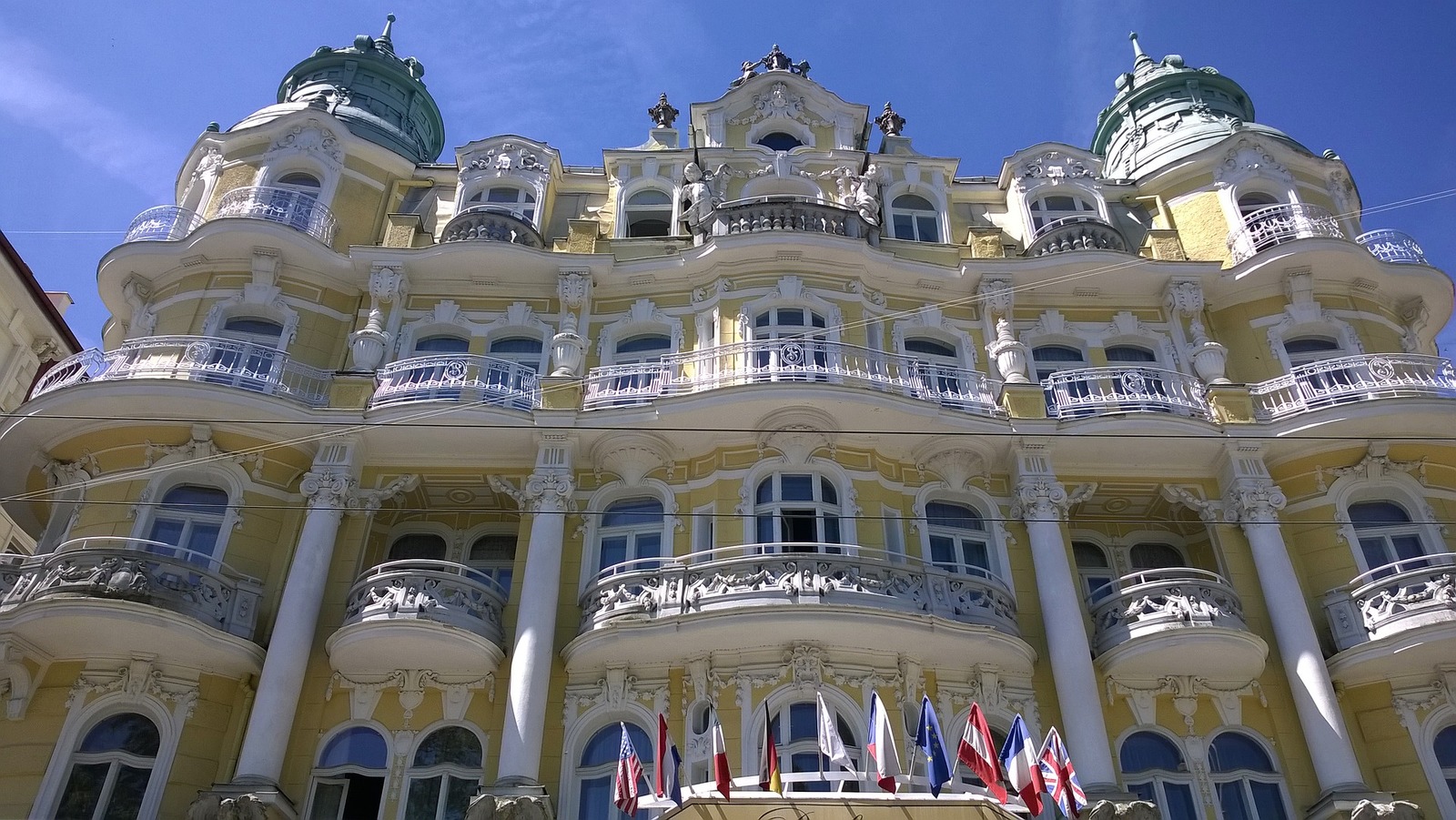 The course of the Royal Golf Club contains 18 holes/ 72 par . It is the oldest golf course of the Czech Republic and was opened in 1905 by Edward VII of England. It can be used by both professional and amateur players.

Just outside the spa centre there is a winter areal for downhill skiing. In winter there are cross country runs on the area of the golf club.

Kladská is a precious nature reserve ( Kladské rašeliny – Kladská moor) not far from Mariánske Lázně with an educational walking track . For a long time the Kladska area had been untouched in the deep forests and moors. It was only in 1875/6 that Lord Schönburg-Waldenburg had a hunting castle built in the meadow of Kladska.

Chodová Planá is famous for having the oldest brewery in West Bohemia (Chodovar). It was first mentioned in a charter of 1573. After a fire it was re-erected on the ancient cellar stones in the rocks. In Chodová Planá there are also two very small castles built in1734 and 1906.

Doubrava is an open air museum with ancient farmsteads, half-timber houses and very old trees. Doubrava is situated only a few miles south of Cheb. It is sometimes also called a museum village. A lot of its facades were renovated in the late 1990s.

Podhorn, hilltop just outside of Ovesné Kladruby Goethe used to visit, is an extinct volcano and the highest hill of the Tepla Highlands. Part of the hill is now a nature reserve.

34 km from Ovesné Kladruby. Cheb has a Roman castle and a great number of houses in Gothic, Renaissance and Baroque styles. The market place dates back to the 13th century and contains the Baroque town hall that stayed unfinished for lack of money. The German name of Eger is derived from the river Eger on which it lies.

43 km from Ovesné Kladruby. Besides Mariánské Lázně, Karlovy Vary is the best known and world famous Spa in the Czech Republic. It lies in the West of the country at the confluence of the rivers Eger and Tepla. It is famous for its so-called White Colonnades. Karlovy Vary has a total of 14 mineral springs, the most famous and strongest of them being in the White Colonnades called Vřídlo (sparkling spring). The Russian-Orthodox church St.Peter and Paul's with its golden vault roofs is also worth seeing. The greatest architectural sight is the church of St. Mary Magdalene's just above the Vřidlo built in 1736. Also above the city there is the 35 metres high observation tower 'Diana'. It was built in 1914 and can be reached by cable car. 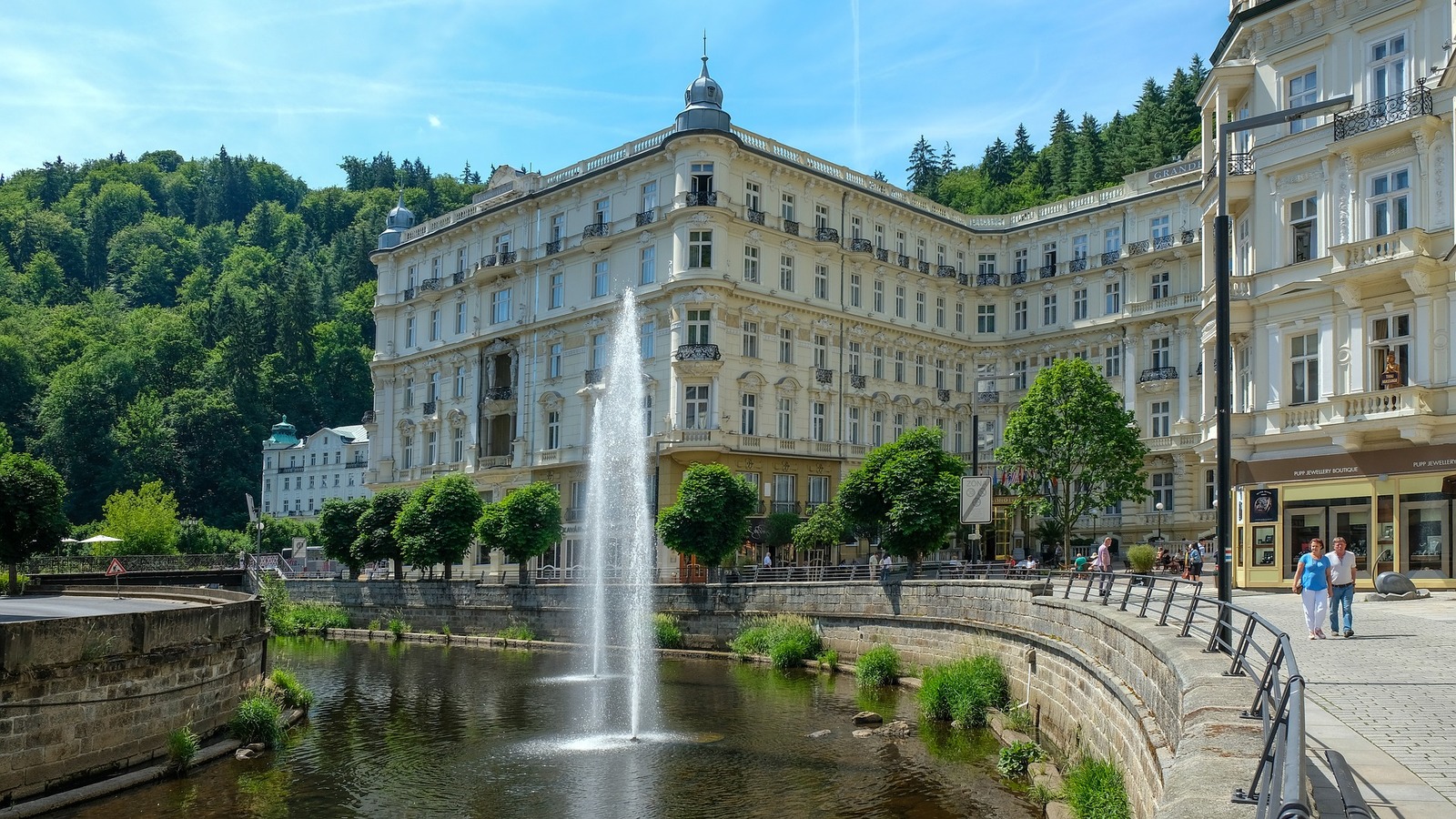 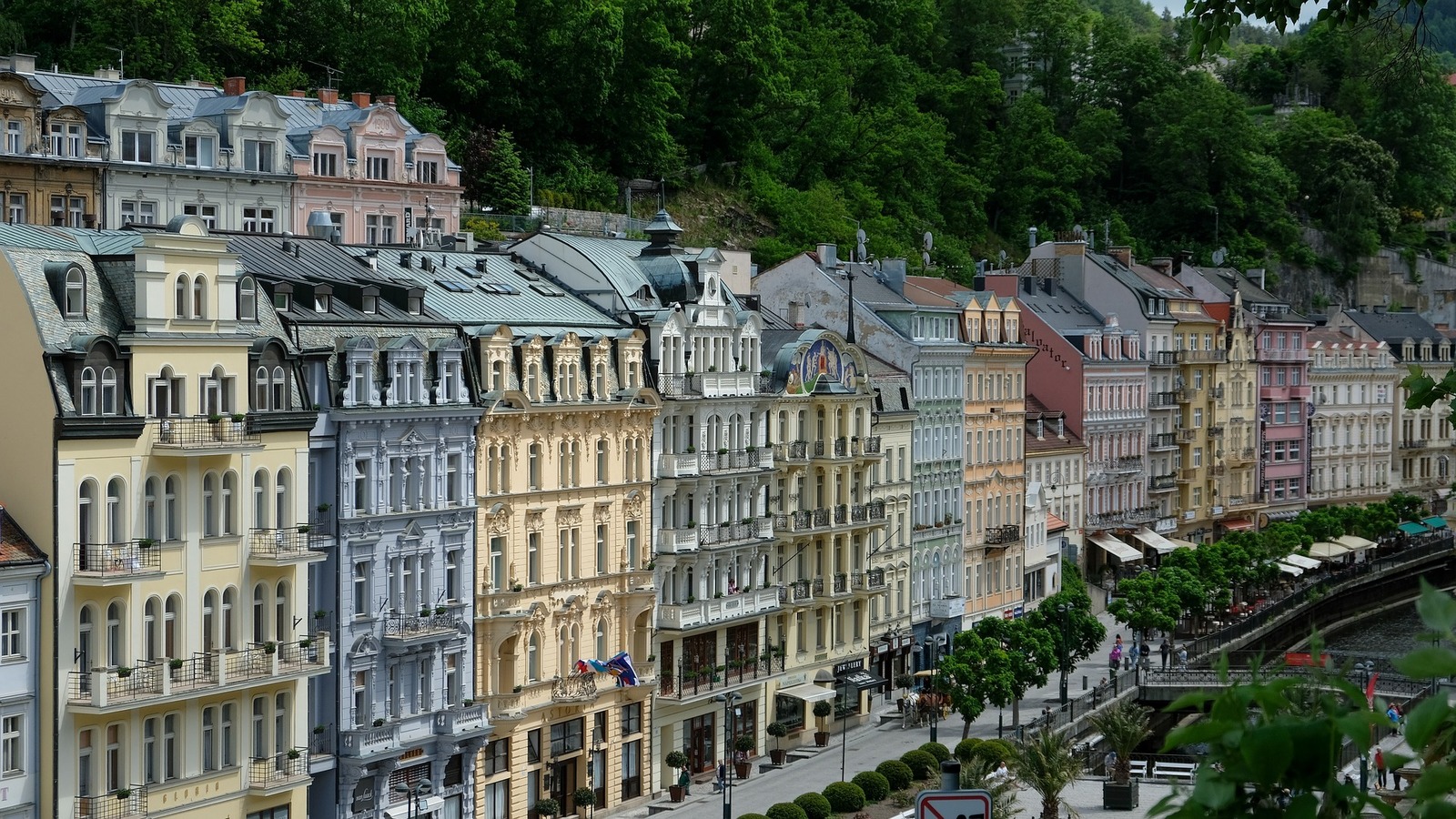 36 km from Ovesné Kladruby. Františkovy Lázně, situated in the very West of the Czech Republic is the third spa town in the famous spa triangle of Bohemia together with Mariánské Lázně (Marienbad) and Karlovy Vary (Karlsbad). Because of its beautiful surroundings it is sometimes also called 'the jewel of the Bohemian spa town'. Here you feel that time stopped at the beginning of the 19th century. The spa buildings of the town , which was founded as a spa town in 1793 are in the style of classicism. The so-called forest park covers an area of about 450 acres.

The Jewels of the Czech republic

70 km from Ovesné Kladruby. Plzeň is the fourth largest city in the country. It got famous for Pilsner beer and the Škoda Works company. The West Bohemian Museum is one of the most important museums of the area. In 1959 the brewery museum was founded as part of it. In 1987 it was handed over to the state owned Pilsner brewery and is now under the roof of Pilsner Urquell Brewery. Also worth visiting is the historical underground of Plzeň, a far reaching complex of subterranean rooms and hallways under the complete old part of the city. Originally they were medieval cellars of merchants as well as a great number of wells. These were later connected with each other and today they are used as a drainage system for the ground water. Part of the historical rooms are open to visitors. The tower of St.Bartholomew´s Church with its height of 102 metres is the highest church tower in the whole of Bohemia. In good weather the Bohemian Forest about 70km away can be seen from there. The zoological and botanic gardens with an area of 52.5 acres in the district of Lochotin are also interesting.

Prague is one of the oldest and largest cities in Central Europe. A famous sight is the Castle of Prague (Pražský Hrad) with St. Vitus’s Cathedral. It is the largest closed castle complex worldwide and is situated on Hradshin, the hill of Prague. Founded as early as the ninth cent, it is the official residence of the President of the Czech Republic today. St. Vitus’s Cathedral, which was built in the Gothic style from 1344 onwards by Emperor Charles IV, is situated inside the castle complex. Another famous sight is Charles Bridge, which connects the old part of the city with the so-called Lesser Town of Prague. The old part of Prague is famous for its old houses, which often date back to Romantic or even Gothic times, as well as for its great number of churches and romantic lanes. In the new part of the town Wenceslas Square is very popular. With its modern shopping malls it is hard to believe that it, too, has its origin in medieval times. The city centre is characterized by Art Deco and Cubist buildings. Prague is divided by the river Vltava, which can be crossed over 13 bridges from different ages. 60 metres high Petrin Tower, which is not far from Prague Castle, was built in 1891 after Eifel Tower in Paris. 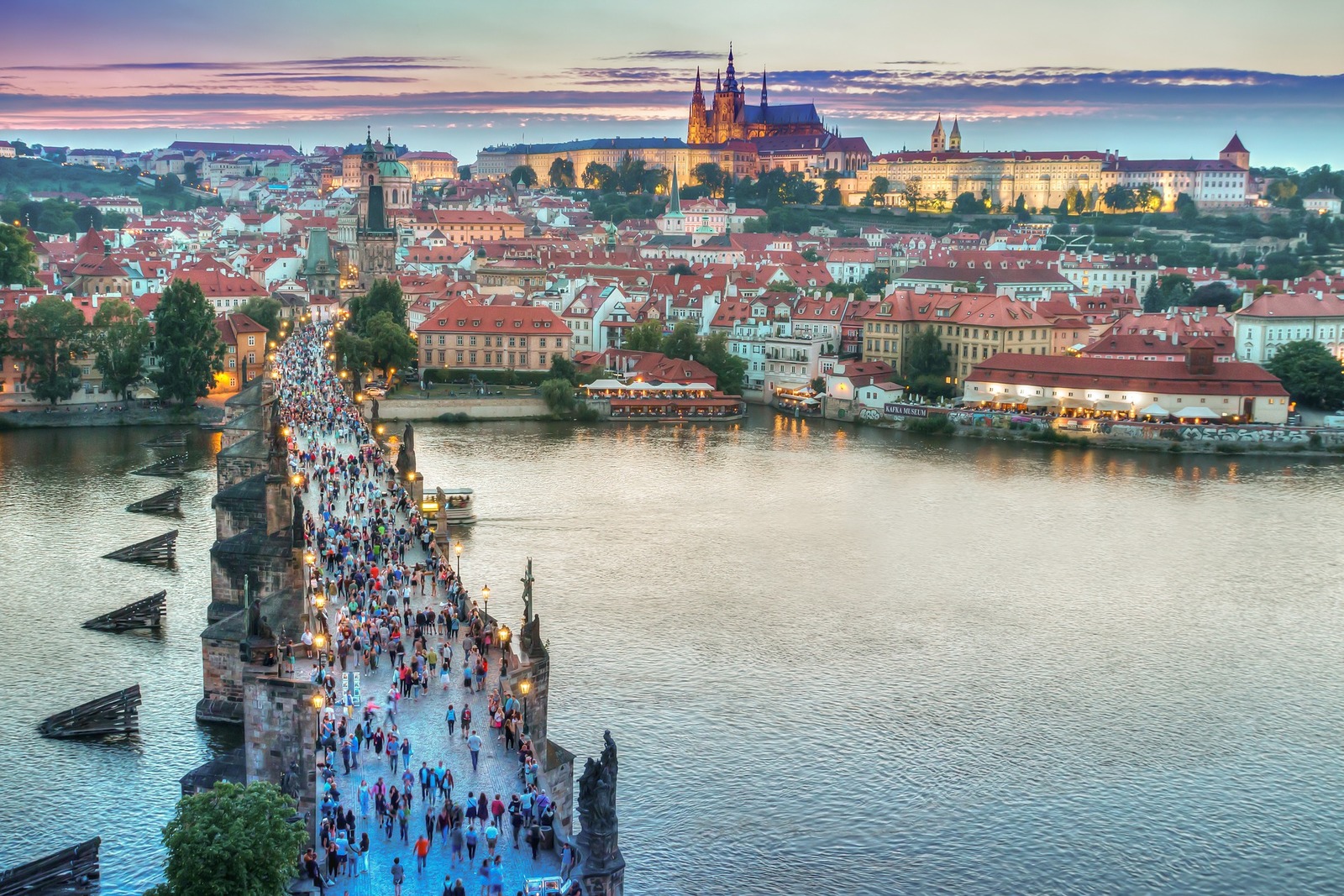